The new permanent home for the Mother will be over 25,000 sq ft in area and will feature beautiful freestanding sannidhis (shrines) for the Mother, Ganapati, Subhrahmanya and Siva, all carved out of granite. Siva’s sannidhi will face West while the other three face East.  Rajarajeswari Devi’s sannidhi will open into an ardhamandapam with the Mahameru at the center. A few short steps will lead into the grand granite mahamandapam (a raised, pillared hall) featuring a variety of unique and beautifully carved granite pillars. Facing the Devi at the other Eastern end of the mahamandapam will be her nandi-vahanam, bali peetham and dhwajasthambam, as well as the yagashala (homa kundam).

Around the mahamandapam along the North and South walls will be located smaller sannidhis for various deities associated with the Sri Vidya and Saiva Siddhanta traditions, such as Dattatreya, Nataraja-Sivakami, Ardhanareeshwara, Manonmani (Akhilandeshwari) Devi, Anjaneya, Bhakta Nayanmars, Bhairava and the Navagrahas. The north wall will also feature a vasantha mandapam for all the utsava murthis (processional deities).

In between the mahamandapam and these smaller sannidhis will be a wide space where devotees can sit, walk around in pradakshina, gather for festivals, or take the utsava deities in procession on a silver chariot within the temple.

In the south-east will be the pakashala, the kitchen, exclusively for the preparation of naivedyam for the deities.

The eastern end of the temple will feature visitor services areas such as the Bookstore and Office. The western end will feature specially outfitted rooms for puja preparation and alankaram for the use of temple volunteers. Steps will lead down to a large basement with ample storage space for puja materials and other temple assets, as well as common spaces such as meeting rooms and classrooms accessible to the public.

The temple will enclosed by an outer wall and have four grand entrances, one from each of the cardinal directions. Each entrance will be adorned with a traditional gopuram. The Eastern gopuram will be 54′ in height and when the Eastern doors are open, the Devi will have a direct line of sight to the open land that slopes down to the creek.  The other three gopurams will be 33′ in height.

We have been working with Sri Ashok Mungara and his firm, Architects Construction Managers LLC of Houston, Texas, to come up with design concepts for the new temple as well as a master plan for the property which describes how the new temple will be connected with existing structures, and the development of future facilities. It is proposed that once the new temple is fully built and the deities moved there, the current temple will continue to be used for annadanam and for private pujas and ceremonies.

The final master plan layout is shown on the right, with the new temple and other proposed new buildings in white.

Some of the key features of the master plan include: 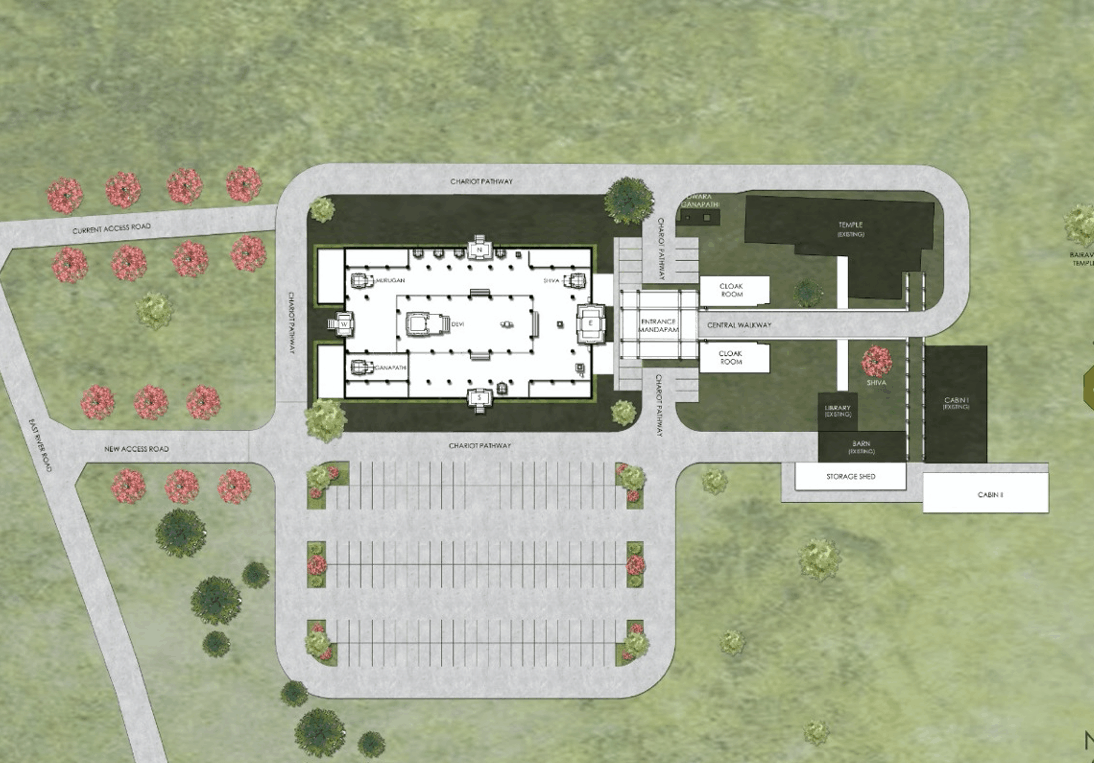 The master plan for the property, which includes the plan for the new temple, has been approved by the town of Rush. Working with our architects and engineers, we have come up with a plan for constructing the temple in phases. Each phase will involve the construction of one or more major sannidhis and the enclosing temple structure. The final phase will involve the construction of the Devi sannidhi and completion of the temple by combining all of the previous phases. This approach allows us to start construction now as opposed to waiting for all of the funds to be raised and all of the granite sannidhis and vigrahams to be carved and shipped from India. Even as we continue to fundraise for the entire temple, our immediate focus is on Phase I, the Ganapati temple. 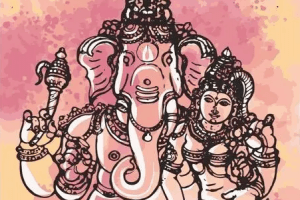 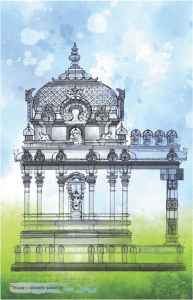 The first phase of the project will focus on erecting the Ganapati sannidhi and making it a functional stand-alone Ganapati temple.

The Ganapati Sannidhi will be carved entirely out of black granite and will feature a beautifully carved vimanam above the garbha gruham (sanctum). The entire structure will be approximately 18’ in height from its base. The ardha mandapam (open portico in front) will feature two beautiful granite pillars.

The moola vigraham will be an exquisite new murti of Sri Vidya Ganapati (also known as Shakti Ganapati) with his consort Siddhalakshmi.  Facing the murti in the ardha mandapam will be a Mushika Vahanam and Bali peetam, also of black granite.

Carving of the sannidhi and the new vigraham of Sri Vidya Ganapati  is already underway in India. We are in the process of finalizing construction drawings, applying for the building permit, and signing a construction contract for Phase I with local firms. With Devi’s grace, we hope to break ground on Phase I in 2021.

Phase II will involve the construction of the Murugan & Siva temples. As each phase is completed, the foundations and superstructures of these phases will be joined and locked. Depending on the funds we are able to raise, we would like to complete the rest of the temple in Phase III.

Fundraising for Phase I

Ground breaking for Phase I